Established in 2004, #TeamFrogsquad has grown from strength to strength, with an emphasis on building a team of marine professionals that can operate in many areas of the marine film environment. Although specialists in various disciplines, we work as one, the Frog Squad. 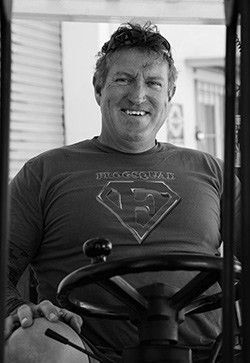 Growing up in a beach and water mad family, Jim started surfing at age seven and still loves the ocean years later. An excellent swimmer and water polo player, achieving national honours, Jim wanted a career that kept him close to the sea so in 1989 he joined the South African Navy. After qualifying as a Part 1 Clearance diver, he stayed with the Navy for a further three years, completing the Deep Dive, Coxswain and Supervisor courses. Jim left the Navy in 1992 and transitioned into sport diving, working as a diving instructor and boat skipper. He moved up to the warmer waters of Sodwana Bay and Mozambique where he honed his surf launching skills running dive charters for dive centres at a number of 5-star lodges. After five years and a case of island fever he moved back to Cape Town and started working for a local dive travel magazine, Divestyle. The flexible hours allowed for time to freelance in the film Industry as a marine film specialist which lead to the setting up of Frog Squad in 2004. Three decades later and still loving the ocean, Jim is one of the most experienced Marine Co-ordinators around, having worked extensively in the film industry for over 17 years. His credits include: Red Water, Lord of war, The Triangle, Strike Back, Mary & Martha, The Jungle Book, Roots, The Giver, Resident Evil, Hooten & the Lady, Black Sails and Deep Blue Sea 2 & 3, to name just a few. 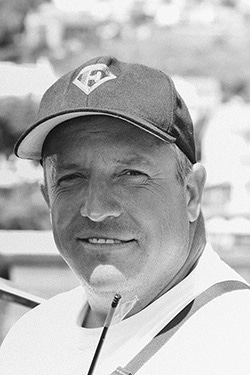 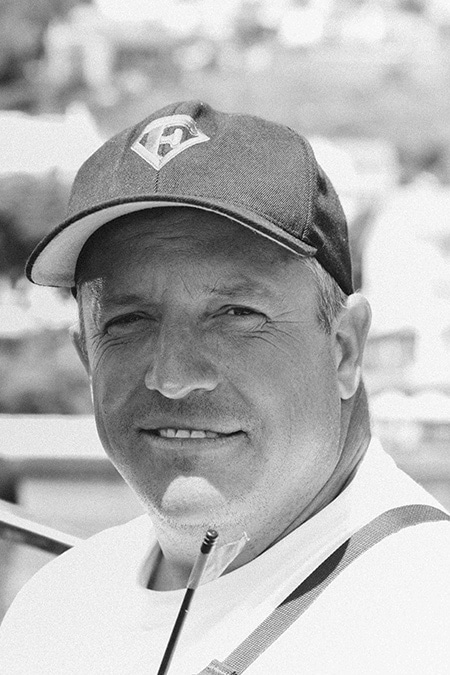 Having come from a family with three generations of divers, Jason's life has always been closely connected to the ocean. By age 16 he was an accomplished water man, a surf life saver / sport diver closely connected to the National Sea Rescue Institute. At 18 he was recruited into the South African Navy. Here, as a part one clearance diver, he received "The most practical diver of course" award. Jason then spent the next 2 years gaining experience with underwater explosives, mine counter measures, and operational dive team procedures in the SA Navy.

In 1994 he left the navy and spent 10 years working around the world as a sport diving instructor, diamond diver, boat skipper and crew on cruise ships in the Med. As a commercial diver, he work on salvaging wrecks both old and new. In 2004 he returned to South Africa and joined forces with Jimmy Fraser and they set up the Frog Squad. After 14 years coordinating on film sets, Jason now spends his days underwater operating the camera. His underwater credits include Red Sea Dive Resort, Tomb Raider, Outlander, The Last Face, Tiger house, Resident Evil, North-men, The Giver, Dark Tower and Blacksails. 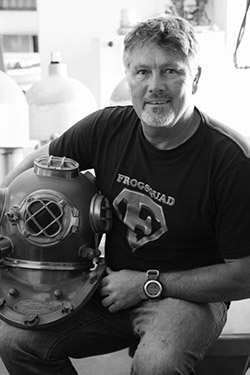 Born in Zimbabwe, AJ moved to the coast at a young age where he submerged himself into the life aquatic. At 18 he became a Professional Lifeguard, shortly thereafter he joined the South African Navy which honed his water skills. He excelled earning himself the position of Senior Diving & Explosives Instructor for Diving Center. After 16 years of service, AJ left the S.A. Navy and worked on various offshore contracts around the world.

As an avid fisherman and surfer AJ spends all his free time at sea where by chance he reunited with old friends and joined the Frog Squad in 2004. 16 Years later AJ is an accomplished Marine Co-Ordinator, boat captain and diving supervisor dedicated to the film industry. He has headed up projects mostly in Africa and Asia. His credits include, to name a few, Fishing Without Nets, Black Sails, Red Sea Dive Resort, Outlander, Tremors, On The Run, Troy (Fall of a City), Strike Back, Inside Man, Bloodshot, Deep Blue Sea 3, Black Beauty… 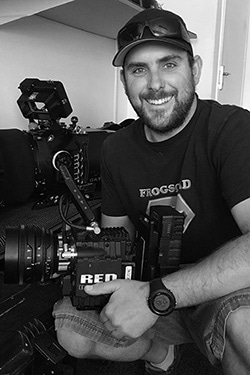 Born and raised in Cape Town, where the ocean is part of his everyday existence, Brendon left school and completed his commercial diver certification. Once qualified and working, he was introduced to Charles Maxwell, an Emmy award winning underwater camera operator.

Having a passion for photography, Brendon saw an opportunity and started to work for Charles. He started as a general assistant / safety diver and quickly gained the work experience to operate the camera on stock footage shoots. Three years later and looking for his next adventure, Brendon met the Frog Squad.

Today, Brendon runs the Frog Squad’s Underwater Filming Division, where he manages and maintains our underwater camera gear, offers assistance to our DOPS or operates the camera himself when required to do so. Having started out as a camera assistant for Charles, Brendon now finds himself operating the underwater camera for the Frog Squad on the set of Origins, Black Beauty, Blood Shot and Deep Blue Sea 2. 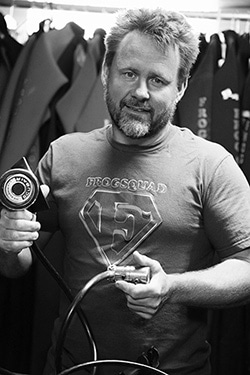 Butch started diving in 1994 after his return from deployment in the South African Infantry. He spent the next 11 years working in the diving industry as an instructor teaching advanced dive skills for Technical divers and doing servicing and gear testing for Orca Industries. Butch is a qualified gear technician for all the major scuba brands in South Africa and in 2005 he started working for the Frog Squad as our gear techie and skipper and has been with us ever since. Butch is the Frog on the ground and serves as our team leader on set. His credits include Primeval, Blood and oil, Black Sails, Tomb Raider, Deep Blue Sea and Red Sea Dive resort.